“Attitudes are contagious. Is yours worth catching?”
―Dennis and Wendy Mannering

Last week, I mentioned that Evan and I were doing a little Fall decorating at our friend Kathy’s house. She and her husband, Eddie, were kind enough to open up their home the night before The Chapel Market so that all the volunteers and vendors could swing by for some supper before hitting the hay that night. Today, I’m going to show you what we had fun pulling together. And by “we”, I mean mostly Evan and our sweet little helper-for-the-day, Lilly, because I was mostly on picture-taking duty. 🙂

We started in the dining room. Kathy had a nice, long runner on her table, and Evan started his tablescape by placing two ($4) pedestals near the center of it. (He got them at a place called “Dirt Cheap” in Montgomery, for anyone who is curious about where they came from.) After that, he added some of the pumpkins we got at the Farmer’s Market the other day. One on top of each pedestal, and groupings of them in between and on each side of the pedestals…

Next, he added a lantern at each end of the runner, and one in the very center. After that, he mixed in a few mason jars (for flowers), some brass candlestick holders and taper candles, and some small, glass votives.

Last but not least, he filled the mason jars with bouquets, and softened the spaces in between with pinecones, ornamental cabbage and kale…

Get a load of the bouquets…

Here are a couple more photos of the whole spread…. 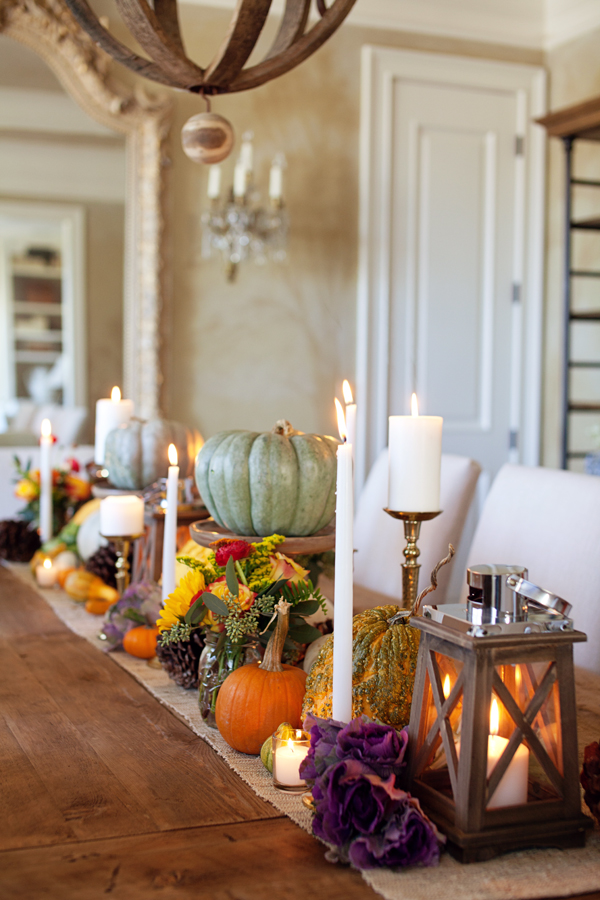 Come on by on Friday, if you have time. I’ve got sort through all the photos between now and then, but I can hardly wait to show you what Lilly helped Evan create in the kitchen.

Lilly celebrated her 8th birthday the day after the Market, and I will never forget the sweet thing she said to Evan while we were standing there in the kitchen. She told him that she loooooves flowers, and that getting to spend the day with him was “the best birthday present ever”. What a fun attitude, huh? One that’s worth catching, for sure. 🙂