You are here: Home / Friends / Rustic and Modern

Remember that Simple With A Hearty Side Of Significant post I published last month? If so, you probably remember that cute little boy that found the notepad I hid over by the gazebo.

His name is Mikey, and Kevin and I had the opportunity to visit him and his house the other day.

He and his mom and dad, Traci and Mike, live just around the corner from us, and I’ve been dying to get in there and see the place ever since we moved here! (Confession: I have craned my neck many-a-night while driving past their house because if the shades are up and the lights are on and you’ve got a chandelier made out of driftwood, I’m lookin’!) 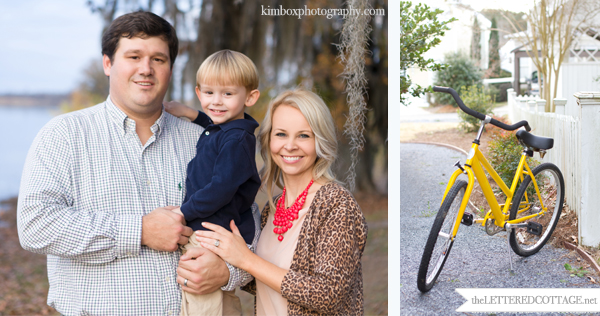 Traci and Mike started building their house in the Fall of 2011, and when it came time to start picking out interior colors, finishes, and decor- they had to really put their heads together. Why? Mike loves rustic, and Traci loves modern. Totally opposite styles, but boy did they do a great job blending them together! For every slick surface, there’s a textural one. Where there are neutrals, there are also vibrants. Curves and geometrics get along great in every room, and equal parts whimsy and worldly make for one truly inspired home.

The gray-colored paint you see on all the doors and trim is a Sherwin Williams color called Dovetail.

One of my favorite ‘little things’ in their kitchen is the small dachshund figurine that looks just like their real dachshund, Bo Jackson…

…and this next photo shows what I’ve been craning my neck so hard to see:

(Note to Traci and Mike if you are reading: I hope I am not freaking you out! I promise I will quit craning now- ha!) #maybe

We headed upstairs after we were finished taking pictures of the kitchen and living room. Check out the cool railing they had made for their stairwell:

Their master bedroom is sunken, which made it feel even more retreat-like…

Rustic meets modern in this room, too. A branch lamp- painted silver, a bright yellow pillow- that features the silhouette of a bird, and a shiny bedspread, topped with a furry throw are just a few of the ways they fused their styles…

The master bathroom is through a set of small doors, opposite the bed:

There isn’t as much rustic going on in this room, but wow is there a whole lot of fabulous! Check it out:

Mike said most of the tile came from Lowes, and Traci told me the light fixtures were ordered by a local interior designer friend of theirs.

There are several more beautiful rooms in Mike and Traci’s home, but we didn’t want to get too snap-happy, or overstay our welcome. I mean, we’re not house stalkers or anything like that. *ahem*