Thought I’d share a few photos of the Bungalow Barn bathroom today since the tile is going in this week. Jim & Katie went with a 3″x6″ white subway tile on the shower walls…

…and a traditional octagon/dot tile (also from Home Depot) on the floor:

The octagon/dot tile will also cover the shower floor, and there will be glass in the window openings on the left and right. There will also be some built-in cubbies (for body wash, shampoo, etc) on the inside of those short walls (below the window openings), and a transom window above the (glass) shower door.

Which brings me to my next topic: the shower door opening. We had asked the contractor who framed the barn for a zero clearance shower, which he said was no problem. Jim (who uses a scooter to get around, but can take a few steps here and there) is able to step up and over a short barrier in his current shower- we just wanted to make it even easier for him with this new one. Especially since we were starting from scratch and there’s always a possibility that he won’t be able to step over a short barrier in the future.

It wasn’t until the other day, when the tile guy showed up, that we discovered it couldn’t be a zero clearance entry. :-/ Basically, the tile man said the whole floor would’ve had to be built two inches lower in order for it to be flat from the bathroom into the shower. *Sigh*

If I’m honest, this is just one of the many things that didn’t turn out the way we had hoped on this build, but I won’t get into all that here. I’ll just say that communication and execution haven’t been amazeballs, and building from scratch isn’t our favorite. 😉

Anywhoobs…the shower door opening is almost three feet wide and there will be lots of grab bars in all of the places Jim needs them.

That’s their washer/dryer closet on the left up there, and here’s a straight-on look at the shower:

Since it won’t be zero clearance, someone on Instagram suggested we look into (removable) ramps to use on each side of the door. I did a quick Google search and found this company that sells lightweight ones (that hold up to 1500 lbs.) that just might work:

They come in a variety of widths and lengths. Or maybe we can find something that is more “one-piece”, like this: 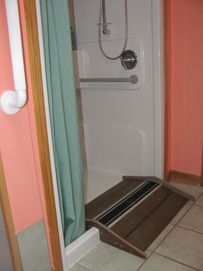 Sorry for the teeny tiny photo. That’s literally the only one I could find on Google, and when I clicked on it, it didn’t lead to a store that sold it, so if you know where we might find something like that, we’d love your input!

And speaking of things that weren’t built the way we had hoped, the bench in the shower is currently too small. Both too short and too shallow. Thankfully, it’s not too late to bulk it up, so it will be four inches taller and three inches deeper by the end of this week. When it’s finished, it will be 18 or 19 inches tall (like a handicap toilet), and 15 inches deep (vs. 12).

Here’s the area where the vanities and toilet will go:

They were priced really well ($239/each), and that included the countertop and sink.

She also got two matching drawer units that will be sandwiched in between them, like this:

I don’t *love* that the countertop on top of the two drawer units will have a seam down the center of it, but it’ll be fine for now, and maybe we can swap those tops out for one solid piece of something later on down the line.

We’re going to swap out the chrome knobs that came with them for antiqued black knobs, like this:

Now that things are moving along in there, I hope to have another bathroom related update to share with you next week!

PS- Here’s a link to this week’s online LuLaRoe pop-up for anyone who wants to check out my latest inventory! XO