You are here: Home / Places / Buckham Fair in the Country

Oh, how I loved your enthusiasm on yesterday’s post! 😀 What fun to read through your comments and discover that Sugar Ray was most folks’ favorite.

Here are a couple more photos in case you haven’t clicked through to check out the whole cottage yet:

Ahhhh…what a beauty! For more pictures and all the info about staying at this incredible place, visit UniqueHomeStays.com. …and prepare to spend countless hours scrolling through all the other enchanting properties on their site, too!

Do you want to hear something funny? Although I would LOVE to stay at enchanting Sugar Ray, it would’ve been my last pick out of the three I shared yesterday. Number 1 for me would be Prairie de Gorge: 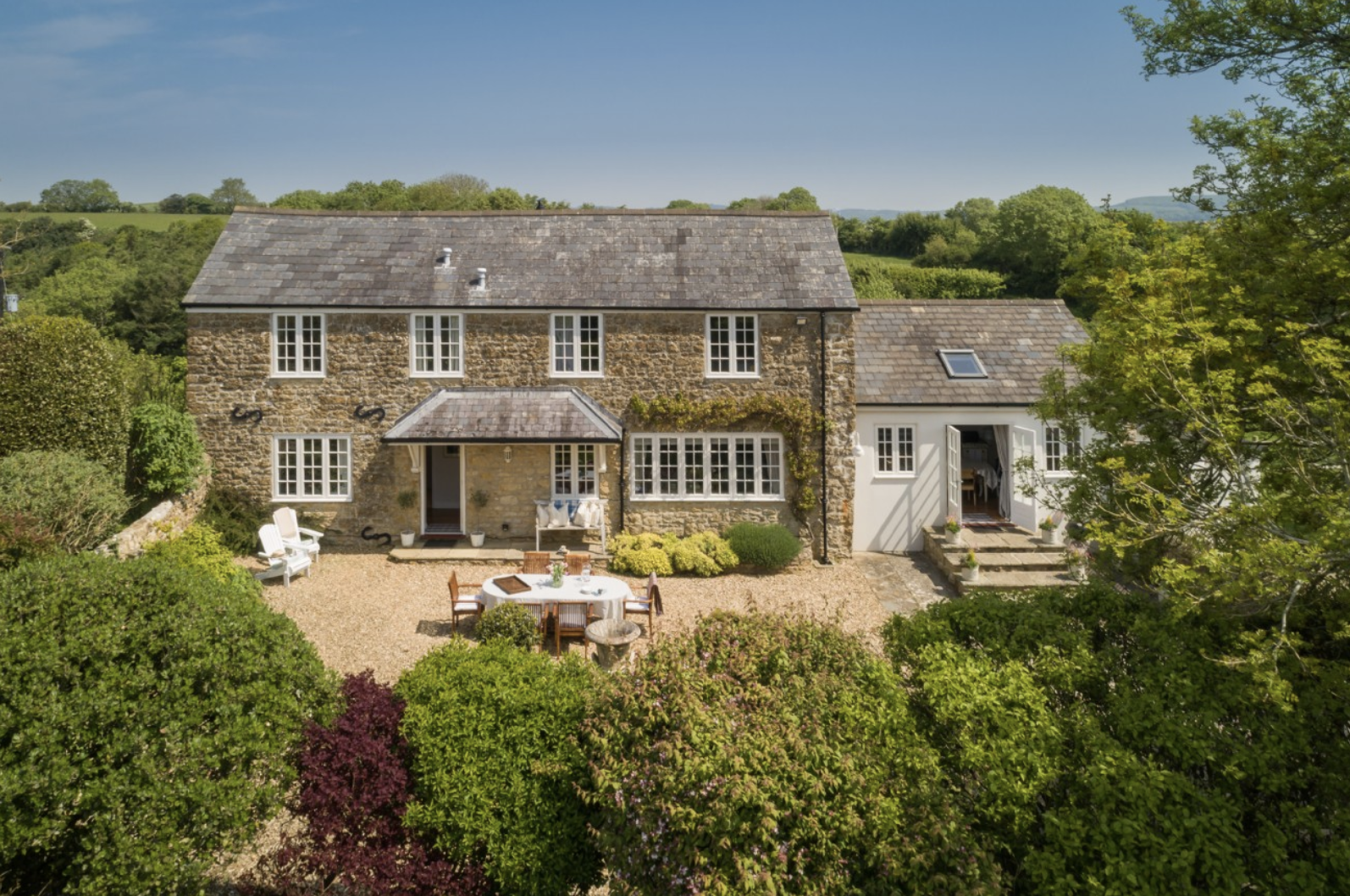 Those historic stone exteriors captivate me in every time! It actually looks a lot like actor Martin Clunes’ house in nearby Beaminster.

Which reminds me, I mentioned in yesterday’s post that the Clunes’ are crazy about the county of Dorset, so I thought I’d share a bit more about them here today since I know that so many of you are Doc Martin fans too.

(Did you know they recently released Season 9?)

Turns out, Martin and his wife, Philippa, first bought a house in Dorset for weekends and holidays back in 1998, after discovering the county when they were invited to a friends wedding in Kimeridge. Then, in 2003, they bought their current farm near the village of Beaminster and settled down into Dorset full time.

Another fun thing I learned in reading about the Clunes is that they love the Beaminster area so much, they created a yearly event there called Buckham Fair.

It takes place every August and it’s held on the acreage just through the medieval woods next to their home.

I was curious about how the Fair began and read in one interview that Martin was being asked to open charity fetes and events all over the county every weekend which got to be hectic scheduling-wise, so to he and Philippa had the idea to hold one big charity event on their own land each year, so that they could put all their energies into that one event, instead of spreading themselves too thin all year long.

We realized that the land would be perfect to hold an old-fashioned type Fair, perfect for all the community to have fun and also raise money for local charities. In fact, we have since discovered that there is an Ancient Charter that allows the holder of the land to hold a Fair each year – even more perfect! -Philippa Clunes

(The Buckham Fair Committee and some of their companions; 2018)

(Just a few of the many famous animals that wow visitors at the Buckham Fair. I believe these were featured on the television series Game of Thrones.)

The fair is sometimes called a “dog and pony show” because of Martin and Philippa’s love of dogs and horses. Guinness World Records was on site on in 2018, as 200 attendees tried to set a record for having the most dogs sit, simultaneously, on command. I searched the web, but didn’t ever find out if they broke the record, but in one article Martin said, “I really enjoy the Best Trick class – possibly my only chance to sit down and take a breather during the day! In some classes there are 200 dogs for me to meet and greet and I feel I have a duty to meet and say hello to every dog“. WOW! How fun!

In fact, Martin even hosted a documentary called A Man And His Dogs (that you can watch in five parts on YouTube) because of his love for the “little hairy people with nice, long noses”. I watched a little bit of it today and look forward to finishing it this week. And I loved watching this clip about his love of horses in another show he hosted called Martin Clunes: My Travels and Other Animals:

Buckham Fair just celebrated it’s 11th anniversary and the Philippa thinks the reason it has done so well over the years is because “There is something for everyone. We have incredible dog show and also horses and ponies. We have the most amazing trade and local food stands. We hand-pick every exhibitor and we really are involved in every aspect of it.”

Unfortunately (for us!) the Clunes announced that there won’t be a Fair next year in order to give the land, the townspeople, and themselves a break. They haven’t announced whether or not they’ll start it up again in 2020, but their website says stay tuned, so I definitely will!

PS- I just discovered there is a name for those of us who are big fans of his work. CLUNATICS! Ha! In one interview Martin said, “Clunatics are a group of avid Doc Martin fans who fly in from the USA, New Zealand, Australia, South America and Hungary every year to come to Buckham as sponsors and volunteer their services in all sorts of areas. They are a lovely bunch of people who have been incredibly generous to Buckham and it’s always a treat to see them!” How fun!