It’s been a while since I’ve blogged about the room makeover we’re working on over at Keith the Fireman‘s house, but I’ve got an update to share today! First, here’s a look back at the inspiration photo I put together for him in Photoshop earlier this year:

See that TV stand up there on the left?

It sort of reminded me of the chunk of glass-doored upper cabinets that used to hang at the far end of  Tommy and Shelley’s old kitchen: 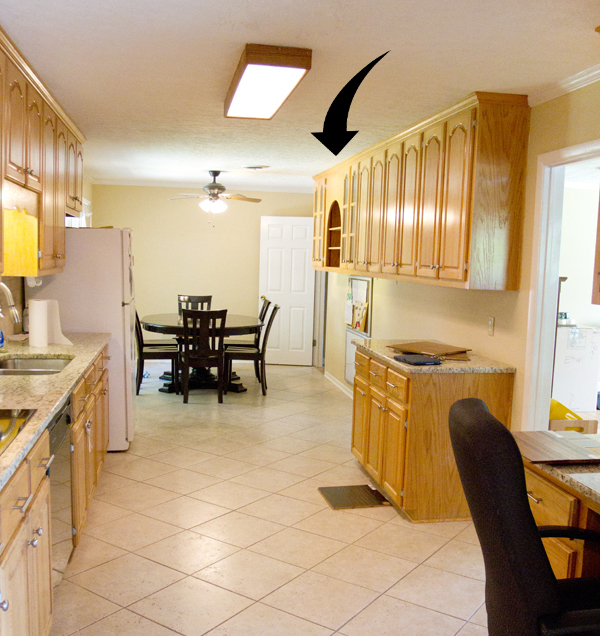 They removed it when they added another bedroom down at that end of the room, but they saved it for me so that I could re-use it as a TV stand over at Keith’s house.

As of right now, it has one coat of Graphite-colored chalk paint on it, the arch has been removed, and the knobs have been moved up to the top of the doors. We pulled it away from the wall last night so that Brian the Carpenter could beef up the top and base with a little extra wood and molding:

I think it’s going to look great when it’s all painted and waxed, and I can’t wait to get back over there and accessorize it in January!

Speaking of which, we’re bringing in all the new furniture and accessories next month as well, and I look forward to blogging about the finished room shortly after that. It’s been such a fun space to work on this year, and I can’t wait to surprise Keith (and Lauren!) with all the stuff they haven’t seen yet! 😀