It’s no secret: I love dish towels…especially if they have loops that you can hang them from!

I was inspired by a dish towel project on The Purl Bee, and had some fun creating some ribbon-trimmed dish towels of my own yesterday: 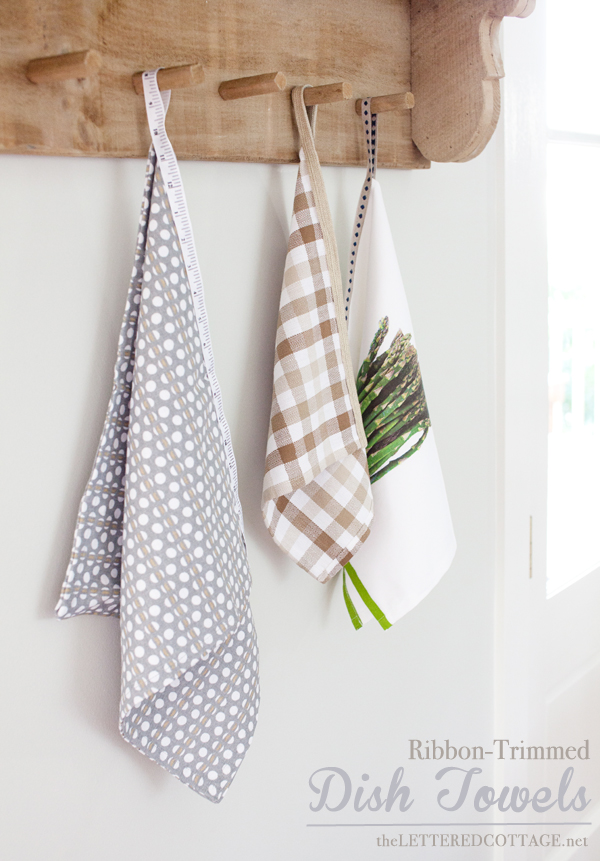 I started with two towels and a gray and white-dotted napkin from Target:

The ribbon I used for this project came from Michaels (measuring tape ribbon) and Jo-Ann Fabrics (khaki and navy-dotted ribbons):

First, I laid out a length of the measuring tape ribbon against one edge of the gray and white-dotted napkin:

I left about an inch at the bottom…

…and folded over a few inches at the top to create a loop:

I used Fabri-tac to hold it all in place…

…and on that particular napkin, I ended up gluing an identical napkin to the back side of it (wrong side to wrong side) so that my “towel” was double-sided when I hung it up.

On the next dish towel, I used a length of ribbon that was already folded in half:

I just ran a bead of Fabri-tac in the middle of that fold and it worked great!

I did the third (asparagus) dishtowel just like I did the first towel, and I used some Fabri-tac on the ends of all of my ribbon to make sure they don’t fray.

I’m using these towels as decor in a friend’s kitchen, so I’m not sure they’ll ever really get used, but it’s okay if they do because Fabri-tac is washable.

It’s a fun little way to jazz up some dish towels, and a super-affordable way to fill up some empty wall space in a kitchen!