You are here: Home / Our House / A Room In Our Home That I’ve Never Blogged About Before

Thought I’d share a blog post about a room in our home that I’ve never blogged about before. Our master bathroom! It still looks like it did the day we bought the place (five and a half years ago) because remodeling/personalizing it hasn’t been a priority. It’s a teeny tiny space- just 6′ deep by 4′ wide (excluding the water closet and shower spaces) so we don’t spend a whole lot of time in there, to be honest. I used my wide angle lens to photograph it for you this weekend, so it looks a little bigger in photos than it does in real life: 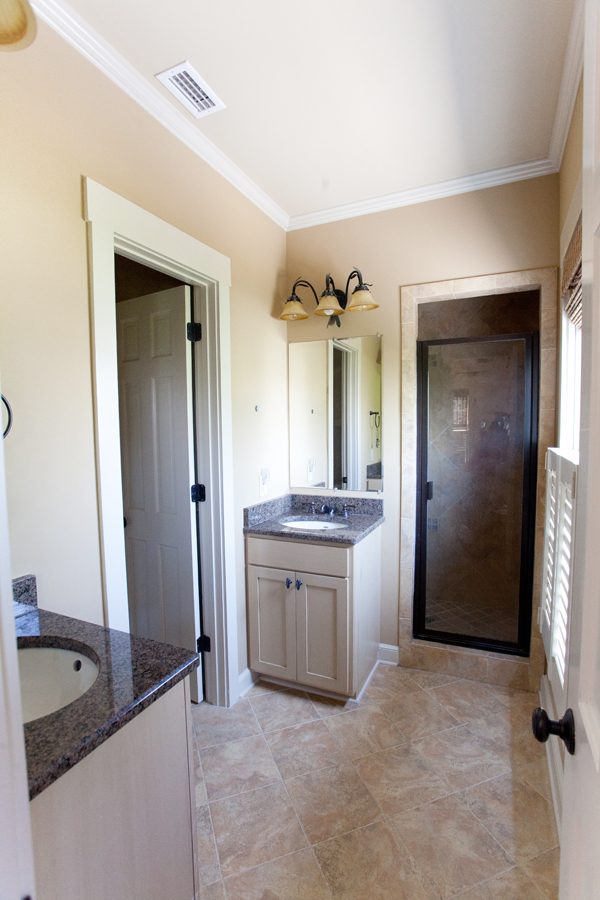 We haven’t used the shower in a couple of years because it started leaking through the floor (we noticed because a water stain appeared on the ceiling downstairs). There’s a shower in Steevenson’s bathroom, so we’ve just been using that one ever since. 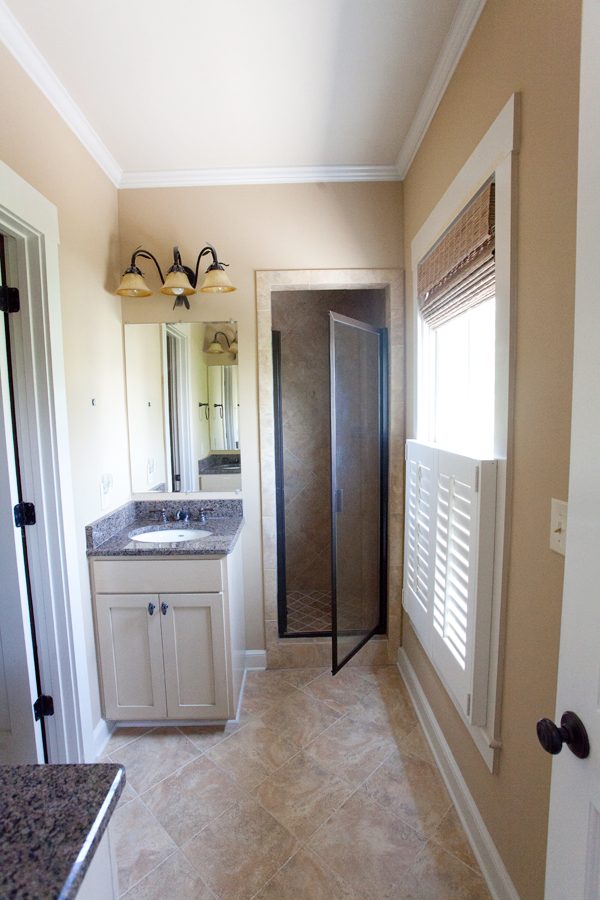 Another thing we’ve never loved about this shower is where the controls are in relation to the shower door. You have to step way in to turn it on and if you forget to turn the shower head, you get doused with water that hasn’t warmed up yet!

It’s clad with a faux travertine-style ceramic tile that isn’t our style so one day we’d love to have it removed and have something lighter and brighter installed.

Here’s a look back at the other side of the room. That’s the bathroom door on the left:

Everything is currently coated in a shade of tan. Even the trim and door is painted a light tan. I know the designer who worked with the builder on this (spec) house probably thought she was choosing “safe” colors, but to use so many of the same shade really doesn’t let any part of the room shine because *nothing* has personality. It’s all just different shades of the same.

Even the light switches and outlets are almond-colored! 🙂 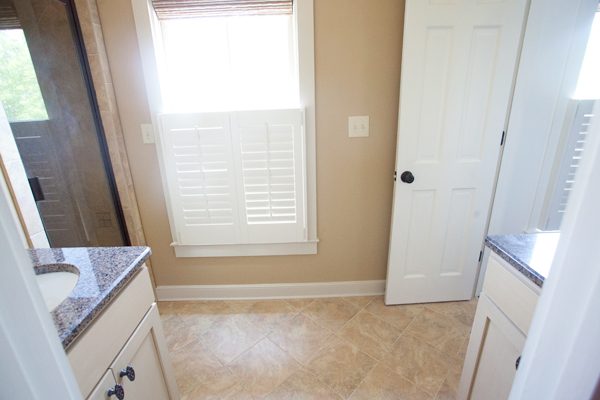 The countertops are granite, but again, they’re just deeper shades of brown. Nothing wrong with dark brown if it’s your favorite color, but it’s not one of ours. 😉

The cabinets are sort of mustard-tan but they’re really nice and solid.

I wish they had done a pocket door on the water closet area, but maybe there wasn’t enough room inside the walls? (I’ve just got that old church window in there for the time being while I’m not using it on the mantel.)

There is a big upper cabinet above the commode, but other than that the room really lacks good storage space too.

You can really see how small the space between the vanities is in that shot. If you count the 12″ tiles, you’ll notice that there are only three between the fronts of both cabinets. We learned really quickly that only one of us could stand there to blow dry or spray anything on our hair- ha!

Back in the day, I wouldn’t have been able to wait to even temporarily remodel a space like this, but as I’ve gotten older, I prefer to wait until we can tackle it all at once. (I should mention that I did have the shutters and woven wood window shade installed a couple of years ago because it was easy to do that one window and we needed the privacy in there.) And in the back of our minds, we’ve never really known if this master bedroom would always need to be a master bedroom (and need two vanities) because Kevin’s mom and dad built a master bedroom downstairs. One day, that will likely become the home’s true master bedroom, and our current master bedroom/bathroom would likely become a second bedroom upstairs.

Here’s a look at our upstairs right now:

And this is how the Bungalow Barn attaches to the first floor:

Obviously, the possibility of expanding our family comes in to play, too, as we think about how rooms may need to serve different purposes sooner rather than later. If we do adopt again, maybe Kevin and I will move into Steevenson’s room and the kiddos could share the master bedroom up there? But does that rule out the option of adopting a daughter because both the foster care system and our adoption agency says boys and girls need separate rooms for the home study? The piano room doesn’t have a piano in it anymore, so maybe with a little more remodeling, that could become a (weirdly-placed) bedroom for a season or two? Either way, I’m thankful to have options and family that isn’t afraid to think outside (and possibly rearrange) the box! 🙂

Previous Post: « How To Decorate The Wall Space Above Your Arched Headboard
Next Post: 7 Cottage Style Design Ideas That You HAVE To See »