Hello! And welcome to the week 2 of our May book club!

If you’re new around here, we’re reading a book called Free Country which was recommended by one of my neighbors. We read Days 5-9 this past week and we’re all here to e-chat about them today.

I’ll start by sharing some thoughts about each Day, and then I’ll throw out some conversation starters at the end of the post!

Favorite part: When Ben described where they stopped on page 104. “Thoverton is a relatively small village with an attractive little garden in the middle. Unlike usual village greens, this one was an actual garden. It had a stream running through it, flowerbeds, trimmed shrubs and a bench.” 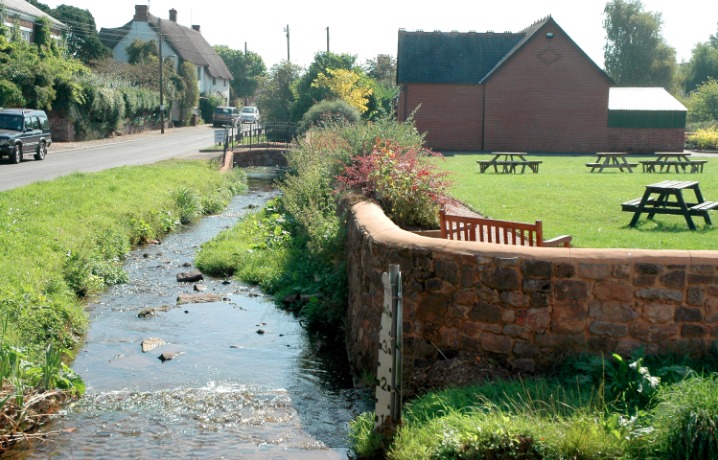 Favorite character: Mrs. Rogers. “She had a big, styled, silvery white bouffant, a black dress, and a white apron.” That’s her Bramble Hill camping park and old brick farmhouse in the photo above. Looks like such a peaceful place!

Favorite after-mopping moment: “We sat on bar stools along the breakfast bar that looked out onto the square. Claire, the girl from reception, brought over two large cappuccinos, two fry-ups, and a couple of newspapers.”

Favorite question: When Ben & George asked someone which direction the Pulteney Bridge was, only to be given the reply, ‘you’re on the bridge, m’duck‘. Ha! And how cool that the Pulteney is one of only four bridges in the world to be lined by shops on both sides!

Favorite discovery: That there’s a woman named Di, in a town called Nettleton, who was awarded the accolade of Best Village Shop/Post Office in Britain in 2007 because she is “a very special who inspires real devotion from her customers“. I took a nice, deep breath after this line too: “With the threat of closure looming over many Post Offices in the region it is the perfect time to emphasize that our branches are about the soul of country life, not just about stamps and car tax“.

Favorite garden: The Living Pizza Field in Newent. “Rob created a huge round field, and then divided it up into 12 pizza-like slices. Each slice of the field grew ingredients used to make a pizza, including wheat, onions (of course), garlic, tomatoes, sweet corn, olives, herbs and even cows, chickens, and pigs.”

Favorite favor: The gathering and combining of 25 mini milks for Monica.

“Monica had lived in Ludlow for nearly 30 years. We wheeled our bikes around to the back garden, which was a story lower than the front of her house, as it was built into the steep Ludlow hillside.”

Favorite chunk of time: The nearly two hours spent at the table in Monica’s kitchen when they learned all about her life.

Favorite line: “Her face was filled with happiness as she looked out of the window, her eyes welling up as she spoke.”

Favorite overnight stay: “Sitting on the deck of a luxury narrowboat with two chip butties and a bottle of wine had never even entered my thought process. Sitting there with the bright, starry Shropshire sky and the gentle lapping of water on the side of the boat, was the most content I had felt in a long time.”

Your turn! I hope you’ll share some of your favorite parts, people, discoveries, visuals, locations, etc, too!

Here are a few more thoughts and questions about Days 5-9 too:

1. On Day 6, Ben says, “We’d only been traveling for 6 days, but we both felt completely out of touch with what was going on in the world. I had thought I would suffer severe withdrawal, but I was coping just fine. In fact, I hadn’t missed any of it.” Isn’t it interesting how quickly that kind of thing can happen? I left my cell phone upstairs all day one time, and by the end of the day, I felt like I might not ever need to pick it up again!

2. On Day 8, Andy tells the guys, “I think what you’re doing is really life-affirming“. I, like Ben, didn’t fully understand what that meant (ha!), so I looked it up and here’s what the dictionary said: “An activity or attitude emphasizes the positive aspects of life” or something that “makes you believe that life and people are good, and offers hope for a better future”. Neat!

3. On Day 9, Ben’s mom gave someone a bunch of sweets to give to the guys so that they wouldn’t know they were from her and, in turn, they wouldn’t think they were breaking the rules. Since, technically, his mom had to approach and rely on the assistance of a stranger, don’t you think it still counts?

I look forward to catching up with you in the comment section below, and then let’s read Days 10-14 this week so we can meet up here again next Monday!