Remember how I told you the words “I’ve got a room that could use a little lovin” are like the opposite of kryptonite to me? Well, John and Sherry over at Young House Love blogged about one of their reader’s design dilemmas last week, and then titled the post: “Ideas Anyone?”.

So, of course, I couldn’t resist playing around with the photo (Jamie)  submitted to them! Here it is:

We have this huge blank wall that has an awkward vent & our doorbell in weird spots, along with 2 doorways and an off-center vault in the ceiling! Fun, fun. I can’t really put any furniture on the wall, so I’m trying to figure out how to decorate it so that is kid/pet-friendly and not too spendy. You can see in the photos we have warmish gray walls, medium-toned wood floors, and lots of black & white accents. Thanks in advance!

Ok. What if Jamie and her hubby removed the little half-round table (that’s currently sitting on the left side of the sofa) and brought in a long, slender console table up against the wall in question:

Maybe one that only has two legs so that it doesn’t stick out into the room very far…kind of like this:

I also suggested using some rustic beams (they could be real or faux) along the wall where it meets the ceiling because I like the way it ties together with the tone of the floor. And I forgot to do it in my mock up, but the doorbell could get painted the same color as the wall, too.

…and idea #3 is similar to idea #1 except instead of a warm gray-painted horizontal plank, I added a long rustic wood plank: 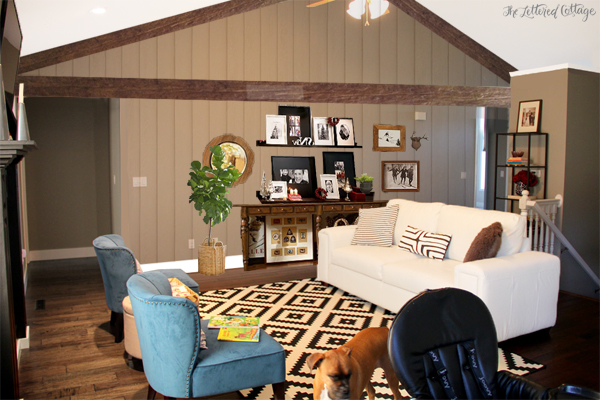 Again, they could cut a hole for the vent and paint it a similar brown color so that it *sort of* disappears, and they could paint the doorbell the same color as the wall, too.

As for the art and accessories below the horizontal plank- I just quickly popped a variety of things in there, but the sky’s the limit when it comes to they could do there. For me, this challenge was more about trying to figure out a way to “bring down” the lower part of the wall to a more human scale so that it would be easier to decorate however they want. Hence, the horizontal plank! 🙂

Anywho, those are just the first few things that sprang to mind when I was playing around with Jamie’s pic. If you’d like to throw out some suggestions for her to read/see, head on over to John and Sherry’s post to join in on the fun!