Bella asked if I would offer up some design advice for her friend Beth’s hallway.

There is NOTHING that thrills me more
than to sit down & and design a space.
Interior design is what I think about while I fall asleep at night, and the first thing that pops into my head when I wake up. I strongly believe in the statement that by improving the quality of someones space, you improve the quality of their life.

Beth mentioned that she likes a “less is more” look, and likes the colors yellow and blue, but not in a “country-yellow-and-blue” type of way.

This is how Beths hallways looks now: 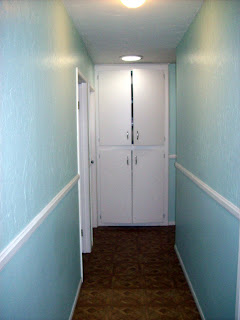 The walls above the current chair rail are textured, and as you know, I LOVE texture- but the current texture is very heavy, especially for a small space like a hallway.
It also doesn’t lend itself to the “clean, less is more” look I think Beth is after. 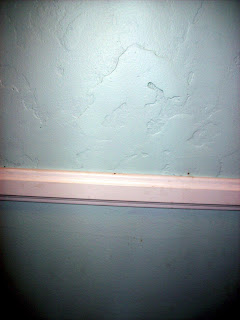 Since a chair rail isn’t really necessary in a hallway (where there are no chairs), I would remove it and install beadboard, six and a half feet tall, up onto the walls. This would help to cover up some of the current texture on the walls, and would freshen up the space. Paint the beadboard a semi-gloss white, to capture and reflect as much light as possible. (Beth mentioned there isn’t much light in the hallway) Cap off the top of the beadboard with moulding, and reinstall the existing baseboards if you can salvage them. Paint all of the moulding the same, semi-gloss white as the beadboard.

Beth mentioned she wanted to hang Black and White photography down the hallway, and the tall beadboard would provide a nice, crisp backdrop for that.

Here are three options that I’ve come up with for Beth: 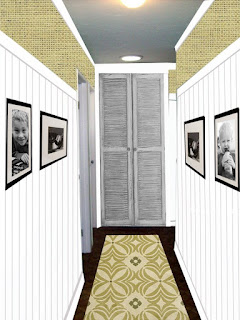 #1 has a natural-colored grasscloth on the upper part of the walls (above the beadboard) Grasscloth is GREAT for covering up pre-existing textures, and the “unexpected-ness” of it would draw peoples eyes up, subconciously creating the illusion of a taller space.
I also suggested the use of old shutters, or louvered closet doors painted blue (with the option of being distressed) as linen closet doors. If finding the right size is an issue, they could easily be constructed out of wood to look more like this:

I love the idea of using two, tall doors (instead of four short ones) at the end of the hall to create a less “busy” view. Also, the tall door would reinforce that sense of height I would love to create.
Using painted shutter-style doors would give your eye something pleasant to see at the end of the hall, and would make the entire length of the space feel tied together and would give passer-bys a nice experience, from start to finish.

The runner I incorporated into the design was just one of a million you could choose. I chose this particular one because I thought it added a nice pop of pattern, but the color palette was still nice and neutral.

Lastly, I might paint the ceiling in the hall a very pale blue color, just to add some whimsy and create a complete look. If not, I would freshen it up with a new coat of white. I couldn’t really tell what the light fixture closest to the camera looks like, but if it’s outdated, I would replace that as well. (The light in the background is a sun tube, which lets in natural light through the roof)
———————————————————————– 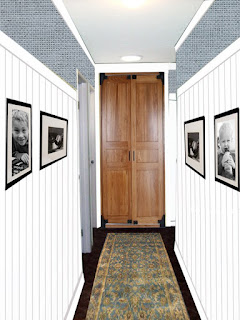 #2 has the same Grasscloth on the walls, but this time I painted it blue, to appeal to Beths love of the color blue. The runner on the floor is more traditional this time, and incorporates both the blue and yellow/gold tones Beth is drawn to. I used wood shutter-style doors, to inject some warmth and even more organic-appeal into the space. 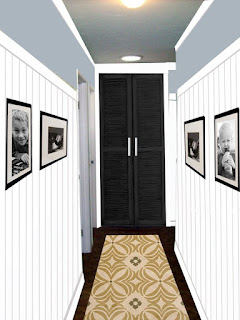 #3 has black shutter doors, to tie in the black frames that adorn the walls in this space, and keep your eye moving. The walls above the beadboard would not be covered in Grasscloth, they would remain the same blue textured surface they are now. ANY type of rug could be used in this design. Traditional or Contemporary, even sisal, seagrass or jute if you like the idea of the texture of the Grasscloth, but aren’t fond of it as a wallcovering.

I always try to make my design ideas interchangeable, so that you can pick which elements you like best and they’ll all work together. For example, if you like something in Design #1, and something else in Design #3- you easily switch things out and create a design that’s perfect for you.
I am also very budget conscious designer, (because I’m a starving artist!) and beadboard (about $18 per 4’x8′ sheet) is a fairly inexpensive way to really freshen up a space if you love cottage/seaside/organic or traditional style.
Paint is also one of the cheaper ways to re-decorate.
Also, if you purchase faux grasscloth wallpaper, it’s only about $16 a roll, and I have a feeling one roll would go a long way in a space like this.

Good luck to you Beth…with all the design advice available to you through the internet, I’m sure whatever you do will look great!