I have a friend named Lacey.
She sings for a band called Flyleaf.
We haven’t talked in a while because their band has BLOWN UP and they are travelling around the globe doing their thang.
I couldn’t be happier for them.
I remember when they were starving artists, touring around the U.S. in a 15-passenger van.
They attended church, every Sunday, in whichever city they happened to be in.
Their very first tour was with my husbands band.
They opened the show every night, and the kids just ate ’em up.
Lacey and I were the only girls on that tour, so we bonded.

Turns out she wrote a song about me, inspired by our time together and the things I shared with her.
Apparently it’s done very well at radio. (No more starving…yay!)
And now they’ve released an acoustic version, which I just heard for the first time, today.

Quite possibly one of the most amazing things anyone has done for me…I am truly touched and feeling extra shiny today. 🙂 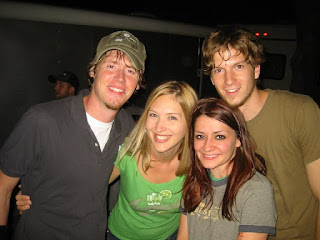 My (sweaty) post-show hubby, me, Lacey and James after the last show on their tour together in Texas.

My blog is my playground and passion pushes my swing!