“She was cut off from everything, except what was inside her.”
― Art commentator, describing folk artist Maud Lewis

I watched a movie called Maudie (twice!) just before Christmas and I can’t tell you how many times I’ve thought about it ever since. Have you seen it? It’s a biopic about one of Canada’s most beloved folk artists: Maud Lewis.

Maud was born with multiple birth defects and suffered with crippling arthritis, and although using her hands became increasingly more difficult, her passion for painting only seemed to intensify with age.

Starting in her mid-30s, and shortly after she married a gruff fish peddler by the name of Everett, she chose to capture the sunny side of life in the Maritimes, and out of physical hardship and extreme poverty, came the most joyous artwork imaginable. Every scene was vibrantly colorful and unabashedly cheerful, and for decades she sold paintings of flowers, fields, cats, birds and harbors from their tiny 10×12 shack.

After I finished the movie, I wondered what became of Maud and Everett’s little house. A quick Google search revealed that the house fell into disrepair following Maud and Everett’s deaths, but members of the community came together to preserve it. I was so relieved to learn that it was removed from its original plot and taken to the Art Gallery of Nova Scotia where it remains as a permanent exhibit. 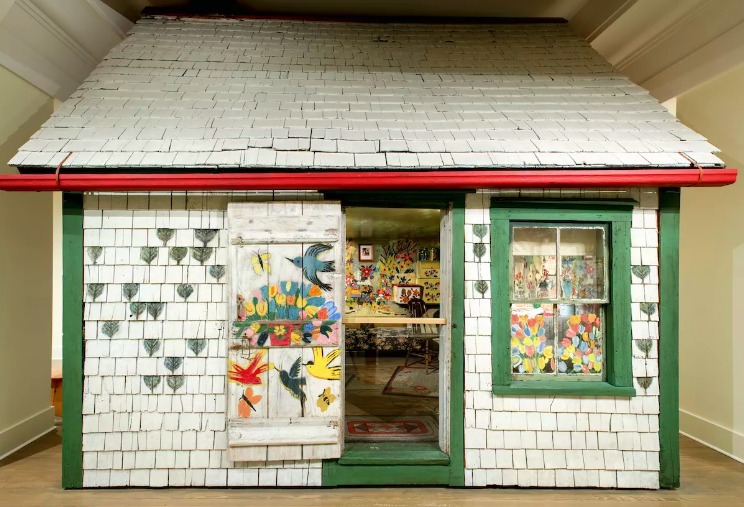 Meanwhile, about four miles away from the actual plot, a replica has been erected.

It was built by Murray Ross, a retired fisherman from Seabrook, as a personal project on his own property. Murray met Maud Lewis when he was 10 years old. His aunt and uncle lived in a house just across the street from hers at the time.

He even replicated Everett’s shop out back:

A third memorial house now stands in the exact location where the Lewis’ house once stood. It’s made of steel (to convey the somber reality of Maud’s life) and is surrounded by colorful gardens to suggest her childlike vision of the world. The site includes a colorful perennial garden, picnic table and benches, and three interpretive panels: one featuring Maud’s story and art legacy, a second about the restoration and conservation of her original home, and a third about the steel replica memorial. Architect Brian MacKay-Lyons created the installation, and it looks so warm when illuminated from inside at night. He also suggested that at some time in the future, an alternate variation might include a sculpture of Maud in her chair in the window.

I felt especially inspired by Maud’s story as an artist because, before I started blogging, I made my living selling my folk art. Etsy wasn’t around back then, but I sold countless colorful paintings of animals and landscapes on eBay, and I would tote suitcases full of my work to any art festival that would have me. I may have mentioned this in a previous post, but one of my fondest memories from that time period was when I was accepted into the (juried) Catalina Art Festival in California. Imagine my surprise when every single one of my (30) paintings sold within the first hour of the first day of the 3-day show! My mom and Kevin were there with me (it was the first time they had met) and because my art sold so quickly, we got to spend the rest of the trip relaxing and exploring Catalina. Merrily, merrily, merrily… 🙂 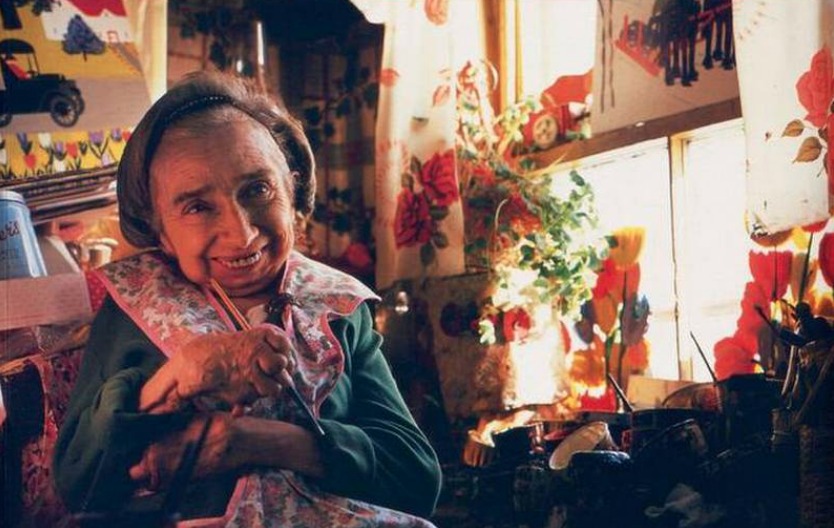 Have you seen any amazing movies lately? Must-watch recommendations appreciated in the comments section below!