You are here: Home / Around The South / Hay Bale Decorating

Remember last year? I published this post: Halloween Hay Bales, and said I hoped to get in on the action next time around?

Well, turns out, the Town of Pike Road has a hay bale decorating competition every year, and this year 41 different neighborhoods entered their decked out bales!

Here are photos of a few I saw while I was out and about this week:

Our neighbor, Sherry, posted a question on Facebook asking if anyone had ideas for our bale, and of course I couldn’t resist throwing an idea out there! I responded with:

“How about we make it look like one of our houses? We could put a tin roof on top, a porch on the front, and use pumpkins and plants all around it!”

I was so excited when Sherry wrote back and said they were going to go for it! I wasn’t around the day everybody was available to work on it, so I put together a rough inspiration photo in Photoshop for them, and here’s what our talented team of volunteers created:

They decided to go for a slightly spooky vibe by adding cob webbing to the side of the bale, and a $1 “Beware” sign from Dollar General to the front door. Neighbor Teri used a Sharpie marker to draw on the (house) number 13…

(Special thanks to Neighbors David & Ashley for doing all the building this year!)

The Town of Pike Road chose the winners last night, but Kevin and I didn’t get home from Montgomery until after dark, so I didn’t even notice the sign that said our bale won 2nd place! 😀

…and here’s the one that won 1st place:

The Kids Choice award went to this guy at the Rolling Hills VFD: 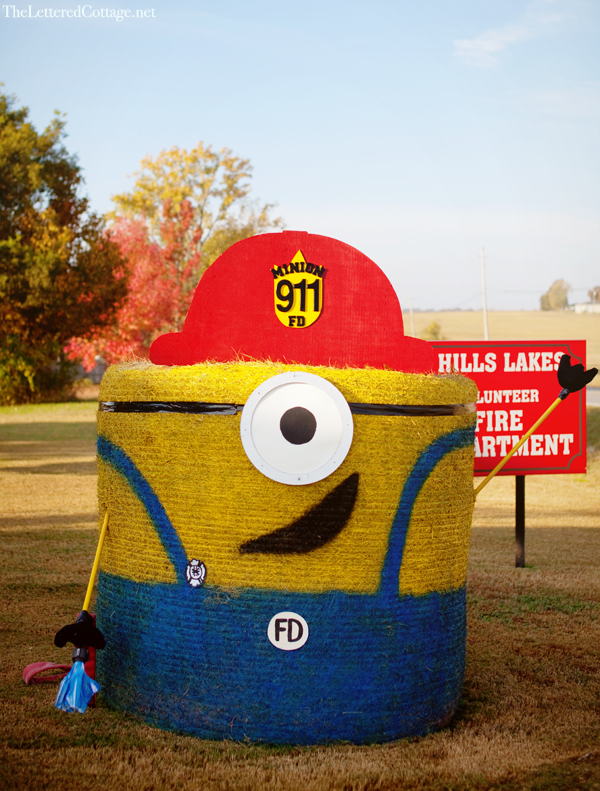 Next year, I’m going to try to get out and see more of them.

I had no idea there were so many in the competition every year! (Or that the Town of Pike Road stretched from here to Troy Highway- LOL!)

I photographed a few of the hay bales at the beginning of this post this morning.

It was still dark out when I woke up, and I really had no idea what time it was. Was it 2am…or 6am? I felt fairly rested, so I was guessing the latter. I was so cozy under the covers though, and I didn’t really feel like getting up yet.

I suddenly felt like I was really supposed to get up and see the sun rise.

But it was chilly-ish, and I was sort of still sleepy, so I tried to ignore the Nudge.

I tugged the blankets up around my shoulders as I tossed from side to side…and side to side.

Alright, fine. I’ll get up and see the sun.

I slid off the bed, and stepped over the luggage I still have to unpack from last weekend. I quietly folded up our (temporary) paper shades, and clipped them in place above the window facing east.

No sun. Only clouds.

I turned around and headed back bed, and wondered if I just needed to wait a little longer?

As I crawled back under the blankets, Max stretched out from underneath them and plopped his little head down onto the pillow next to me. There’s something so sweet about the way a dog plops and sighs right before he drifts back to sleep, isn’t there? 🙂

I hoped to drift back to sleep with him- but that wasn’t going to happen this morning.

If I had drifted back to sleep, I would’ve missed the mist…

…and Kev wouldn’t have met these muzzles…

Hay bale location map in hand, we took our time on back roads we haven’t ever explored. The landscape was so peaceful and pumpkin-y warm, and I don’t think we saw more than three cars the whole time. We must have smiled for an hour straight, and when our tummies started grumbling- we made our way back to town for a sack full of doughnuts from Dunkin. Mmm!

I wanted to save this memory here on my blog today because something really special and exciting happened after we got up this morning! I can’t share the details yet- but one day (hopefully not too far away), I’ll blog all about why I needed to wake up and see the sun…and drive to Dunkin Donuts, too.  🙂