Yeah. That’s right. I said it. Day EIGHTY. TWO. That’s almost three months working in a runty room with no windows and a toilet, thankyouverymuch.

Okay, fine. I haven’t spent half as much time in there as Kevin has.
No, on any given day of the week you’ll find me working in my spacious (it used to be a master bedroom), yet undecorated, home office that has three, count ’em, three big windows. 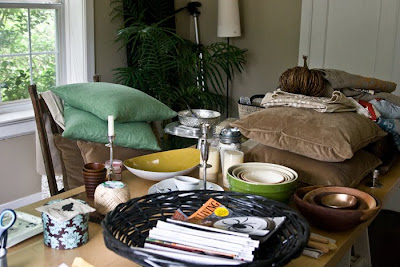 (Here’s a sneak peek of my office. I shot this photo the day of our Nest magazine shoot.
The room is much messier now.)

Truth be told, I think Kevin is starting to look at the guest bathroom sort of like it’s his arch nemesis at this point. 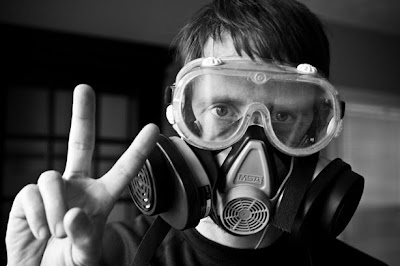 Don’t get me wrong, he is loving how the room is shaping up, and he can’t believe that he is actually responsible for its so-far-so-good transformation- but after EIGHTY TWO days of back-breaking, stinky, dusty, wet, sticky, messy, seemingly never-ending work, and having to tightly strap more than one piece of equipment to his face at a time, he is definitely ready to wrap this puppy up! Plus, he’s a big “natural light guy”. I’m tellin’ ya, the stuff seriously dictates his mood. There’s nothing like a dimly-lit room to majorly mess with his mojo.
I just keep rooting him on and assuring him that all his hard work will pay off in the end! (At least I hope it does!) 🙂

Anywho…as you can see in the photos below, we changed our minds about installing the beadboard ceiling. For some reason whenever I announce a design decision out loud, I always end up doing something different. Announcing things is like the kiss of death. That poor beadboard never had a chance. 🙂
Instead, Kevin removed the drywall ceiling, and uncovered the original tongue-and-groove wood planks that were previously hidden above it… 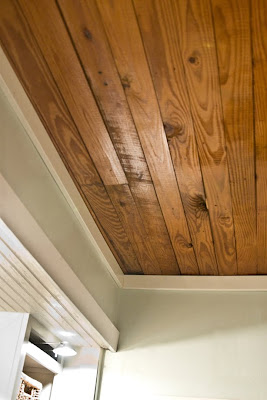 The color of the wood matches the top of the farmhouse table, the new flooring and the new mirror (more on that next week) just perfectly. 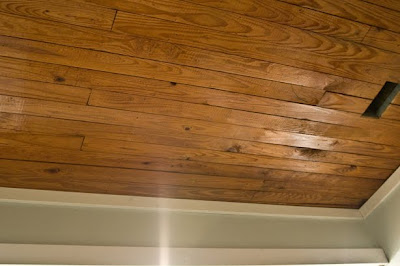 Of course we had to document this part of the reno on video, so that we could watch it when we’re too old to rip down ceilings and install crown molding anymore…

Previous Post: « Houzz Ideabook- Beyond the Bed: Decorating the Wall Behind Your Headboard
Next Post: Our New/Old Dresser »