This weekends episode of Design Star had the season 4 contestants competing against each other in the “White Wall Challenge”. 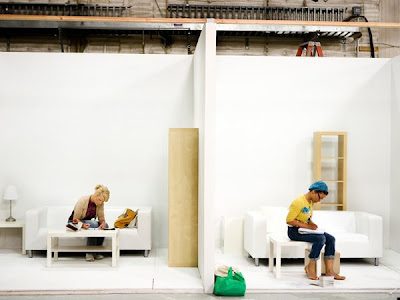 The catch- they could only use things found at a grocery store!

Since I put my design together earlier this week, I used this photo of what a previous seasons cast had to use furniture-wise when creating my drawing: 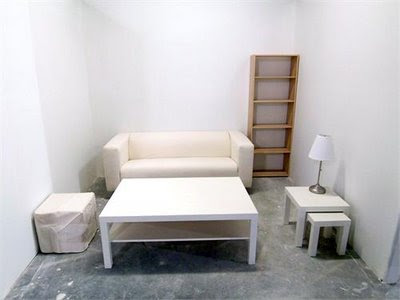 I created a make-believe, Layla-style, “Relax & Read” room design.
This is not what I would have done if I was actually on the show. I heard one of the contestants say that the judges were looking for big, wild designs, but I didn’t know that when I created this drawing earlier this week. So this one will just be for fun! 🙂

As always, just hover over the photo above to see it transform from a previous seasons White Wall Challenge photo, to what I came up with.

The two paint colors I chose are Sherwin Williams’ “Sea Salt” (or something like it), and just a plain old regular white.
I would cut brown paper bags into squares and saturate them in a glue/water mixture. Then I’d apply them (backwards) to the walls, to simulate a khaki-colored wainscoting. (Backwards so any writing that might be on the bags wouldn’t show)
To create the look of chair rail moulding and base boards, I would simply leave the wall white in those areas.
To simulate a banded sisal one, the rug would have been made up of dog food and bordered in Milk Duds.
The bookcase would be painted white, and hung horizontally on the wall above the small sofa.
I would paper the wall behind it with blue, brown and white striped wrapping paper.
I would also use the same striped wrapping paper to cover the “throw pillows”, which would actually be extra-large zip lock bags filled with air.
Inside (and atop) the bookcase is a variety of different-sized cereal boxes, covered in more brown paper bags. I would number the spines of some of them (with a marker) just to add a fun, graphic punch.
To create symmetry, I mimicked the look of the two nesting tables on the left by using a similarly-sized cardboard box, painted white, cut in the shape of the larger nesting table. It would also get a coat of white paint.
I would buy two potted plants at the store, but I’d remove the plants and use two wooden spoons stuck down into the dirt instead. They would be cut at two different lengths. The spoon part would be nestled down in the dirt (for stability) and the handle would be pointing up. I would create topiaries by piercing a grapefruit down onto the top of each handle, and then using toothpicks. I’d attach small broccoli heads to the grapefruits. In theory, it sounds like a really cool idea- but until I tried it, who knows if this would really work or not!
🙂
I also love the idea of using boxes covered in granola, or pasta, to simulate baskets. I would even cut out a handle (as shown in my drawing), so that they look even more like real baskets.
The “frames” on the left wall are actually aluminum foil boxes, covered in black trash bags, and attached to the wall in the shape of picture frames. On the wall underneath the brown boxes are white paper towels, to act as mats. Greeting cards that have black and white photography on the fronts of them would be attached in the middle of the paper towels.
On the right wall, I would hand paint a massive quote that reads, “Good friends, good books and a sleepy conscience: this is an ideal life”. (It’s so true!)
The lower shelf of the coffee table would be painted the same “Sea Salt” color that the walls are painted.
On top of the coffee table, I’d use a cookie sheet as a tray. Chic peas would act as small stones surrounding a candlescape in the center of the tray. I would sink the candles down into vegetables such as artichokes, and wrap some of them with green beans and asparagus. Some kind of ribbon, string or twine would neatly hold the stalks in place around the chunky candles.

The last thing I did was “paint” a wide, chocolate brown stripe down the center of the sofa with Hershey’s syrup to simulate a throw blanket.

And there you have it!
It was so fun putting this together. I may actually have to try the broccoli topiary thing sometime! Ha ha! 🙂